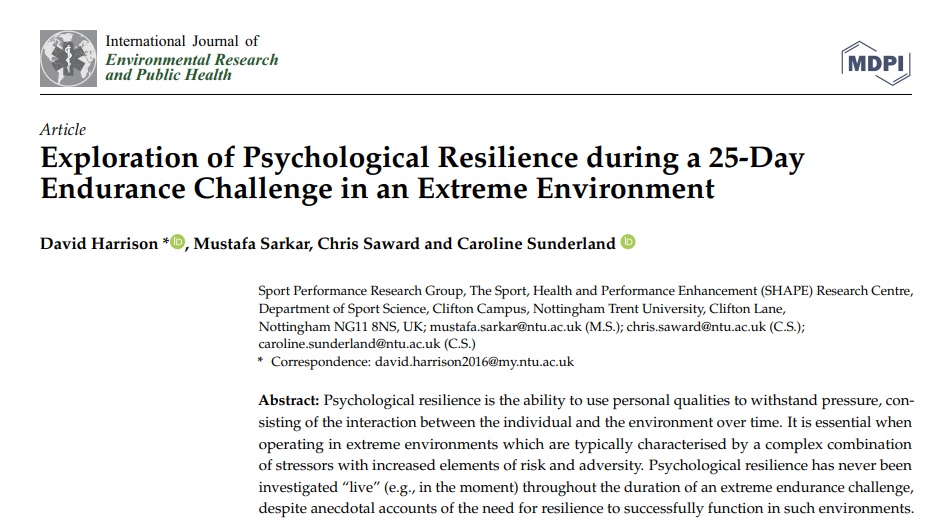 Lots of sport psychological research takes place in a fairly clinical environments – away from the cut and thrust of sport. It might take place in a lab (on treadmills, turbo trainers or basketball hoops) or by asking people to complete questionnaires or interviews. These can identify for some really interesting information – but are always going to be a little distant from how athletes really feel in the moment. For this reason I love seeing research conducted differently – often in the field – to see how the information or findings differ. What do we feel in the midst of a race that is different to when we have more perspective at the end?

This new research from David Harrison, Mustafa Sarkar and Caroline Sunderland based in the Sport Performance Research Group at Nottingham Trent explored Psychological Resilience during a 25-Day Endurance Challenge in an Extreme Environment. The study looked to understand how resilience works in real time by following four athletes (three male and one female) when undertaking a 25 day challenge, marching with weighted packs to 100 peaks in the UK and cycling between them. Video diaries (47 of them) and focus groups (undertaken mid challenge on location) were used to analyse the impact of psychological resilience on the participants and the team noted two overarching themes: the stressors that come from extreme environments and the strategies used to handle them.

The team define psychological resilience as “the ability to use personal qualities to withstand pressure, consisting of the interaction between the individual and the environment over time.” One of the times we will most need psychological resilience then is when we are in an extreme environment (because extreme environments are so complex, have intense stimuli, people have very different reactions to them and the stressors involved are ones in which we would often expect strong reactions to) so it is really important we understand this type of situation.

Some points about resilience which were highlighted in the piece:

The researchers found that how different stressors are perceived can influence our ability to maintain high quality functioning over an ultra-endurance challenge. Thus we need to understand the key stressors, how they can be perceived by different people (at different times and in different sections of the challenge) and have a challenge mindset approach to developing strategies to cope.

Stressors found in this extreme environment

There were two elements which intensified these stressors:

In a challenge like this some of our usual coping mechanisms (like distancing and removing ourself from a situation) become unavailable so you need to have planned for others to use in advance. The main strategy to maintain functioning within the extreme environment was to develop a challenge mindset. There were five key parts to this:

To me this study really highlights that resilience is a complex, dynamic and individualised process which can be grown when we really understand the stressors we are facing, the difficulties they may give us and have developed a challenge mindset approach to handling them.