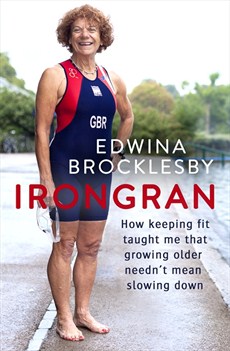 My plan to read 25 sports books in 2018 is way behind schedule but one I managed to read in under 24 hours (to the joy of my little one who got to watch far too much CBeebies that day) was Irongran.  I was involved in the early stages of the book and am quoted in it a couple of times but I promise it was not ego driving me to read it. Eddie is actually a really lovely storyteller, and she has an amazing story to tell. Growing up with a grandma who was Winston Churchill’s cook during World War Two gives us an amazing insight into a historical period of British life, and gave Eddie an inspiring role model to look up to. A career in social work gave her an insight into those struggling with some of the toughest starts in life. And then her husband’s early death from cancer inadvertently changed the course of her life when she found the most effective way of dealing with her grief was through running. Having only started running at the age of 50, Eddie found her running club friends gave her the space and inspiration she needed to get back on her feet and, supported by them and her three children, she signed up to London Marathon. 23 years later (she is now 75) Eddie has run at least three London Marathons, completed some of the hardest Ironman races in the world including the world championships in Kona and competed internationally for the GB age group team many times, rarely coming home without a medal. Oh and she has also cycled across America. As you do.

Much of her sport has been done to give her a platform to talk about her passion; getting older people active. The book includes her research on the importance of being fit to allow you to age healthily and the benefits it gives it terms of friends and mental wellbeing. Eddie has bought her passion to life through the Silverfit charity; a project setting up active sessions in parks across London to give those over 45 exercise, company and fun. She’s even set up a Silverfit cheerleading team!

Each chapter in the book brings to life a well-used phrase (age is just a number, dreams don’t always live up to your expectations) with a great experience behind it. I really loved reading about Race Across America where Eddie forgot to load up her iPod properly before heading off and had to listen to the same album (Billy Joel) for 3000 miles! I also loved her tenacity at tripping over during London marathon, knocking out a tooth, popping it in a bag of milk and finishing the race. These stories of how Eddie doesn’t even consider stopping when in periods of adversity are a great when you need a kick up the bum to go out for your own training. A run after a couple of chapters of this book and you’ll be running 30 seconds a mile quicker out of sheer guilt that you are half her age and far more lazy!